We decided to Do my son a nerf gun birthday party.  we organised a few activities, and I made a few bits for the party bags.

We now rent our kit out if your interested in running a party yourself.  http://localfamily.events/supplier/details/nerf-gun-party-package--13

We hired a room from Alice holt forest, it was £45 for 2 hours and came with toilets and kettle / plug sockets.  We decided to use that as a base and then use the forest around the edge of the room to set up the activities

The for the venue we purchased some hazard tape to create an arena. and some black plastic sheeting to section off the training area (so they can shoot targets and the darts dont go past the sheeting. 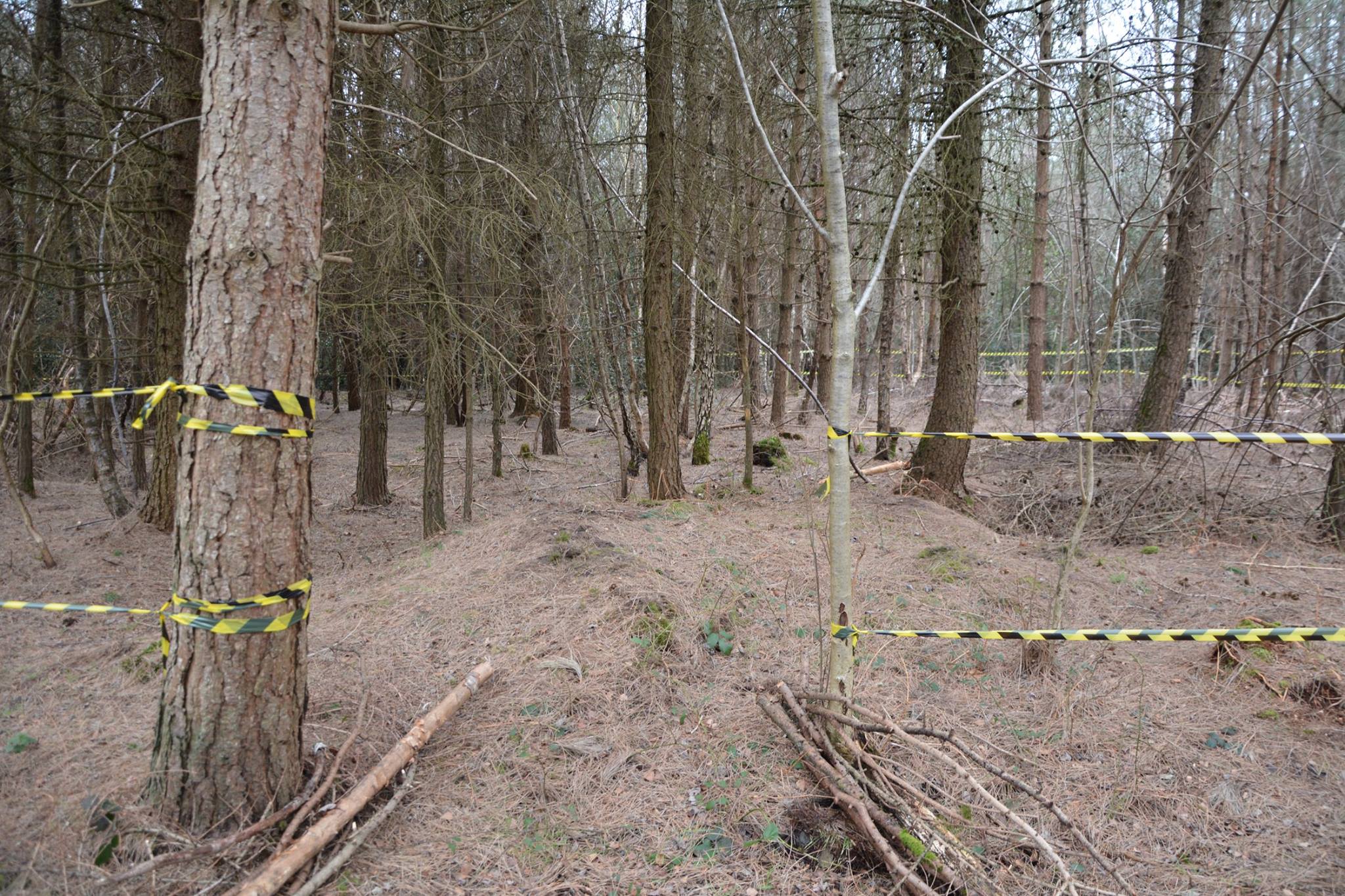 I purchased 20 Nerf guns, 400 nerf darts and 20 pairs of safety glasses for the kids. 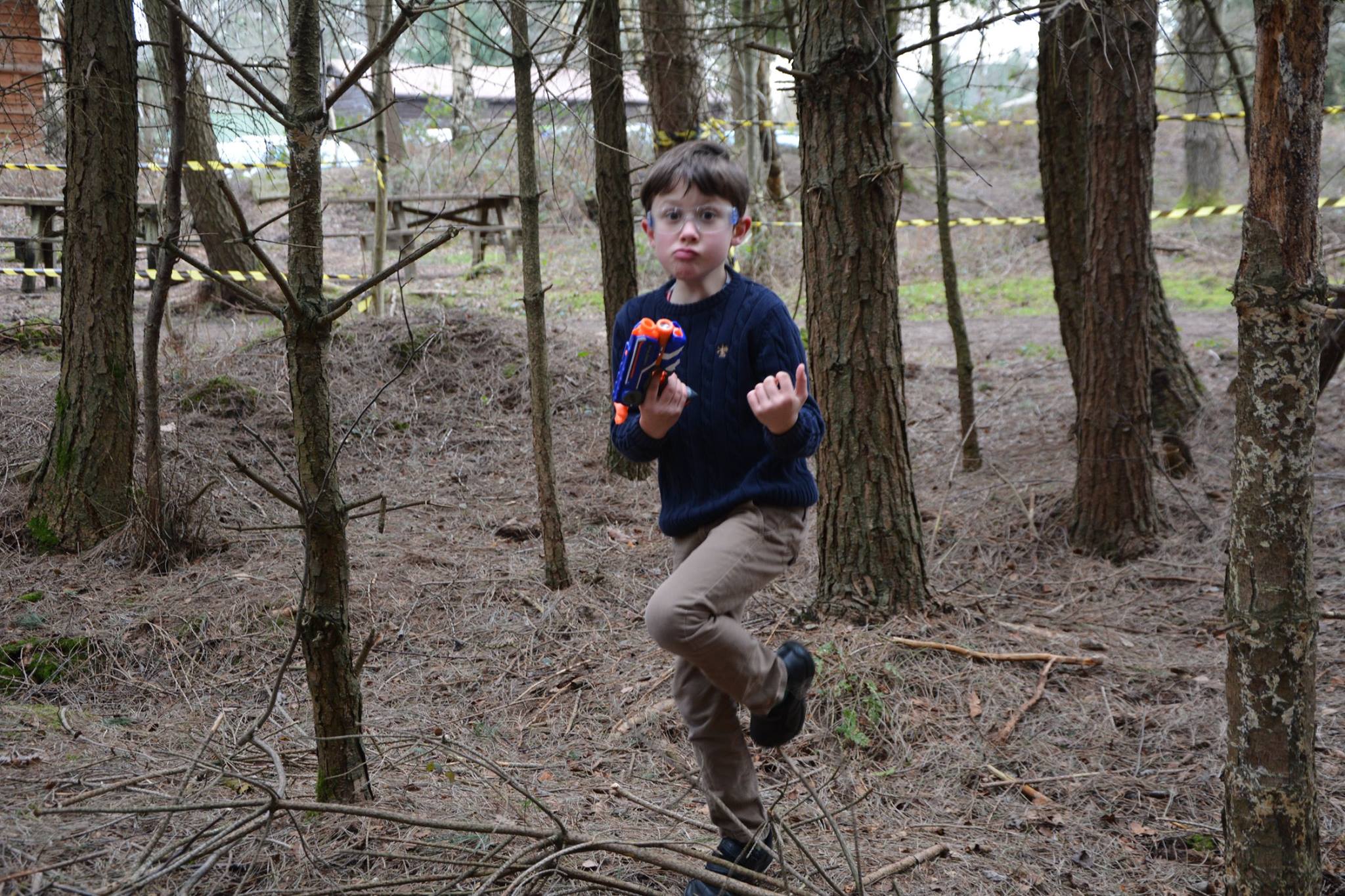 Cam up: I brought some face paints, and some sponges and did the kids (and adults) face paints. 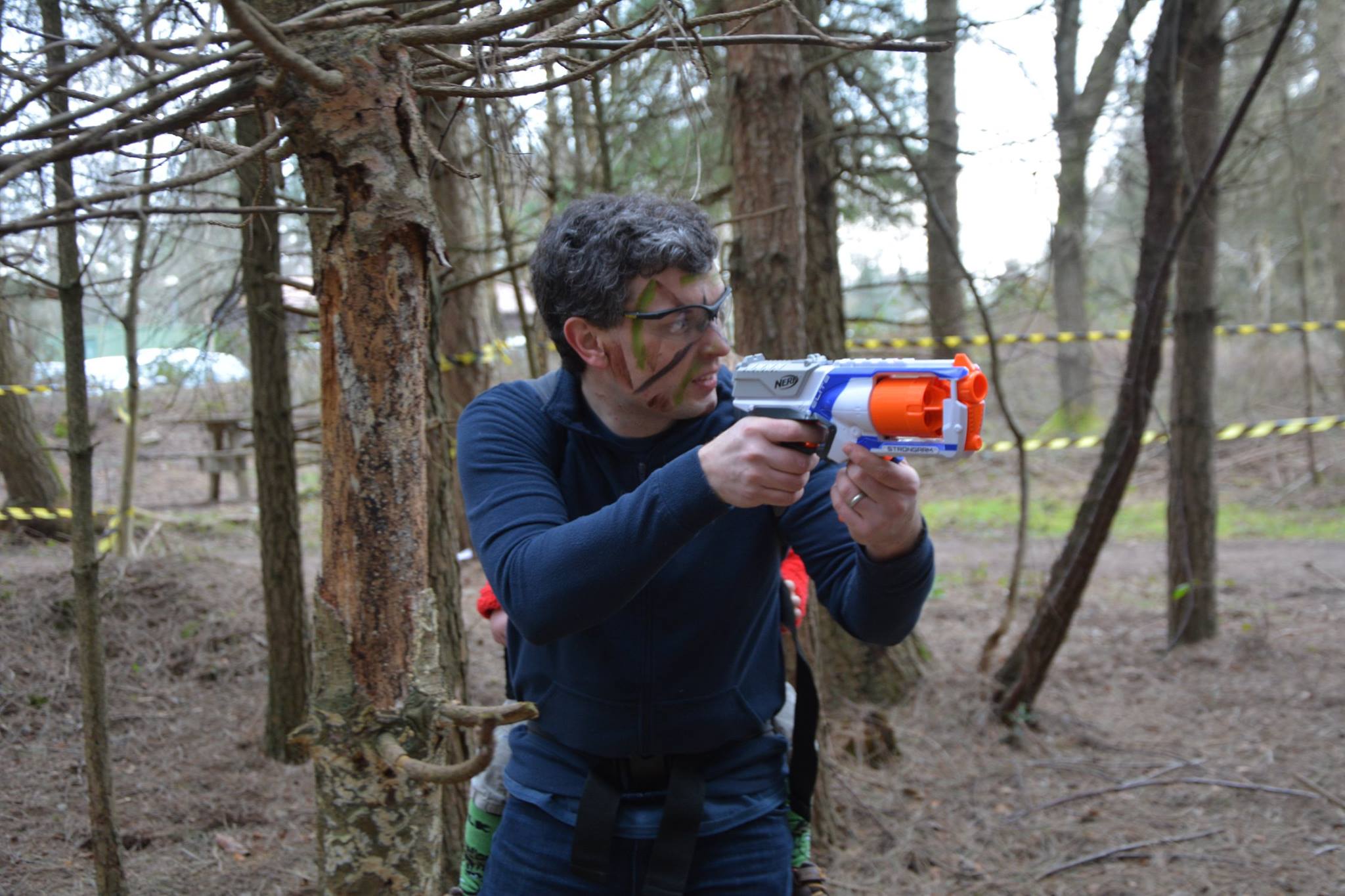 Cans I saved up 10 tin cans before the party. I wrapped them in white paper and numbered them :) and then was able to stack them into a pyramid for the children to shoot down.  5 darts, the person to shoot the highest score off wins.

Pingpong We bought 10 pingpong balls and 10 golf tees, and slotted the tees into a peice of wood, and rested the balls on top.  the children were given 10 darts and had to see how many they could shoot off.  The winner was the child who knocked the most off. 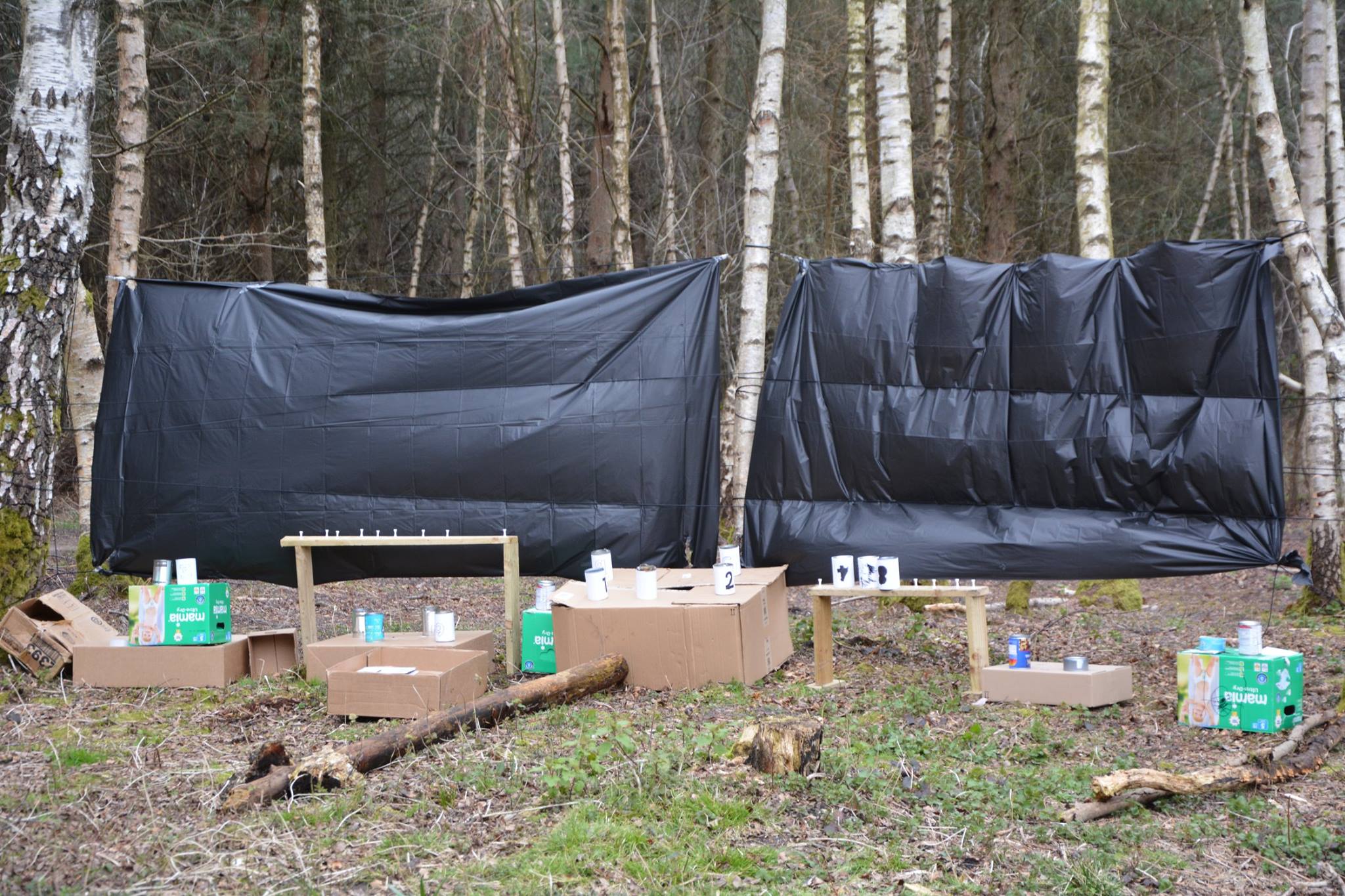 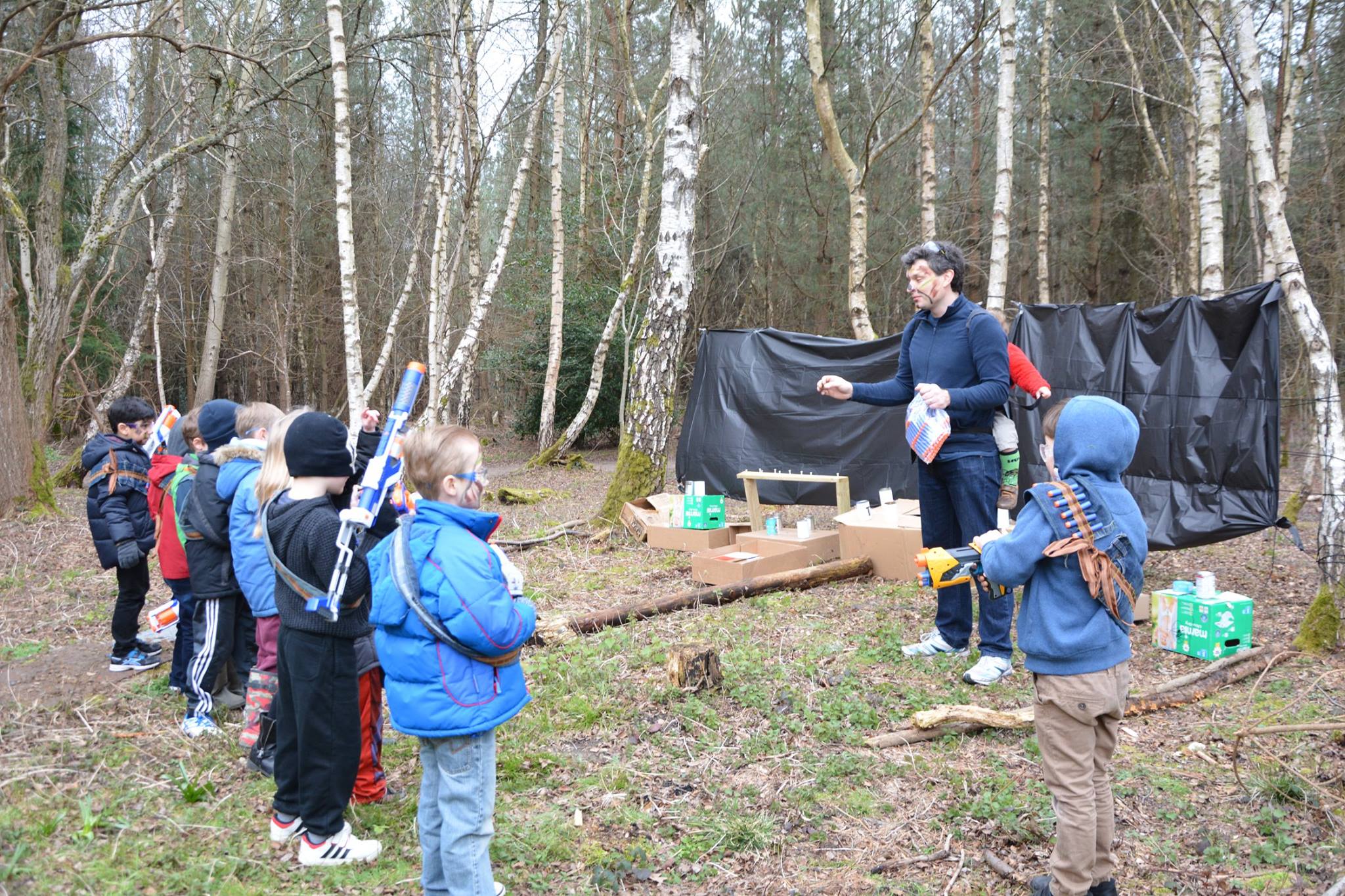 Tea-break:  We popped in for hot chocolate and lunch

We split the group into 2 teams, we created 2 bases and 2 mascots.  each team had to try and steel the other teams mascot. after 5 mins the wistle blows, if you have 1 maskot in your base you get 1 point, if you have 2 mascots in your base you get 2 points, when the whistle blew everyone had to run around and collect the nerf guns.  The the maskots are reset, and the game restarts. we carried on for 45mins

Rather then party hats I created nerf dart holders out of old denim jeans and ribbon. enough slots for roughly 45 darts 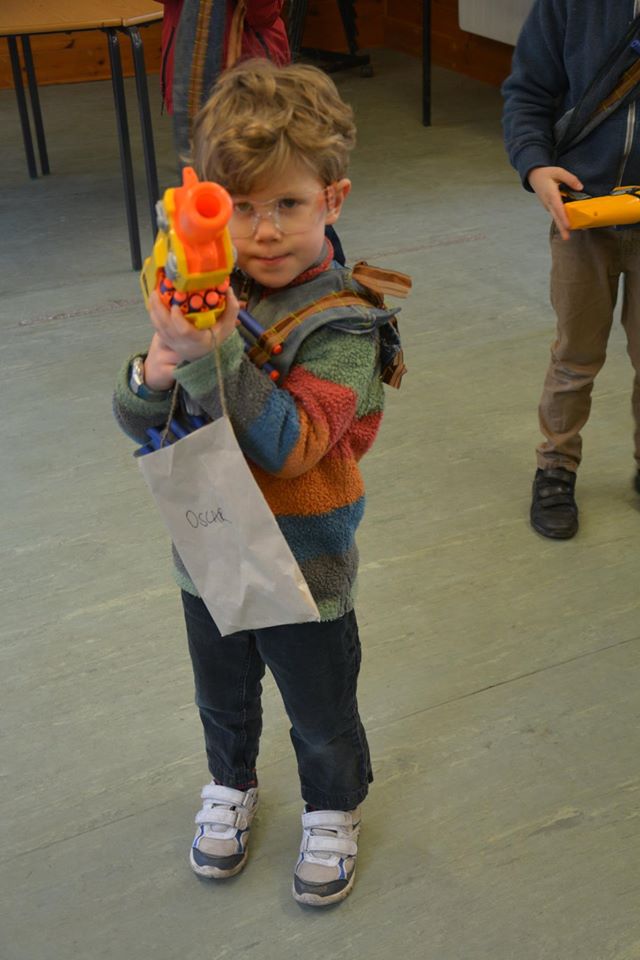 The party bags I had as the nerf dart holders with 10 nerf darts, their safety glasses, some star wars chocolates and a star wars temporary tattoo.  I made the paper bags from amazon packaging and garden string. They also took home a bb8 muffin. 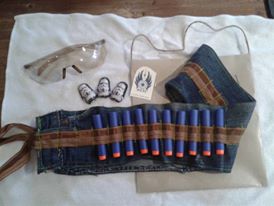 We decided to keep the food simple.  I pre cooked a large turkey and bought a bunch of french stick/rolls,  The children then had a turkey in a roll, a hot chocolate, a muffin and a slice of cake :)  I made the cake myself and decorated using Renshaw icing. 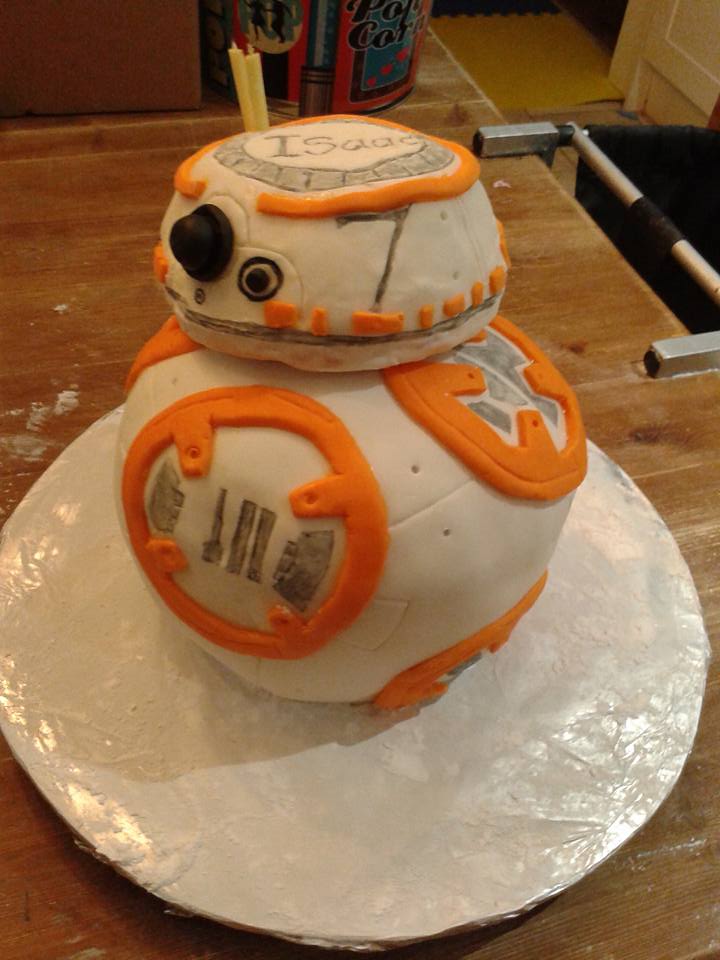 To keep with the ethos of reducing waste, we used paper servettes to serve the childrens food in.

Costs for 14 children and 14 adults


So just under £10 per child with parents eating for free. 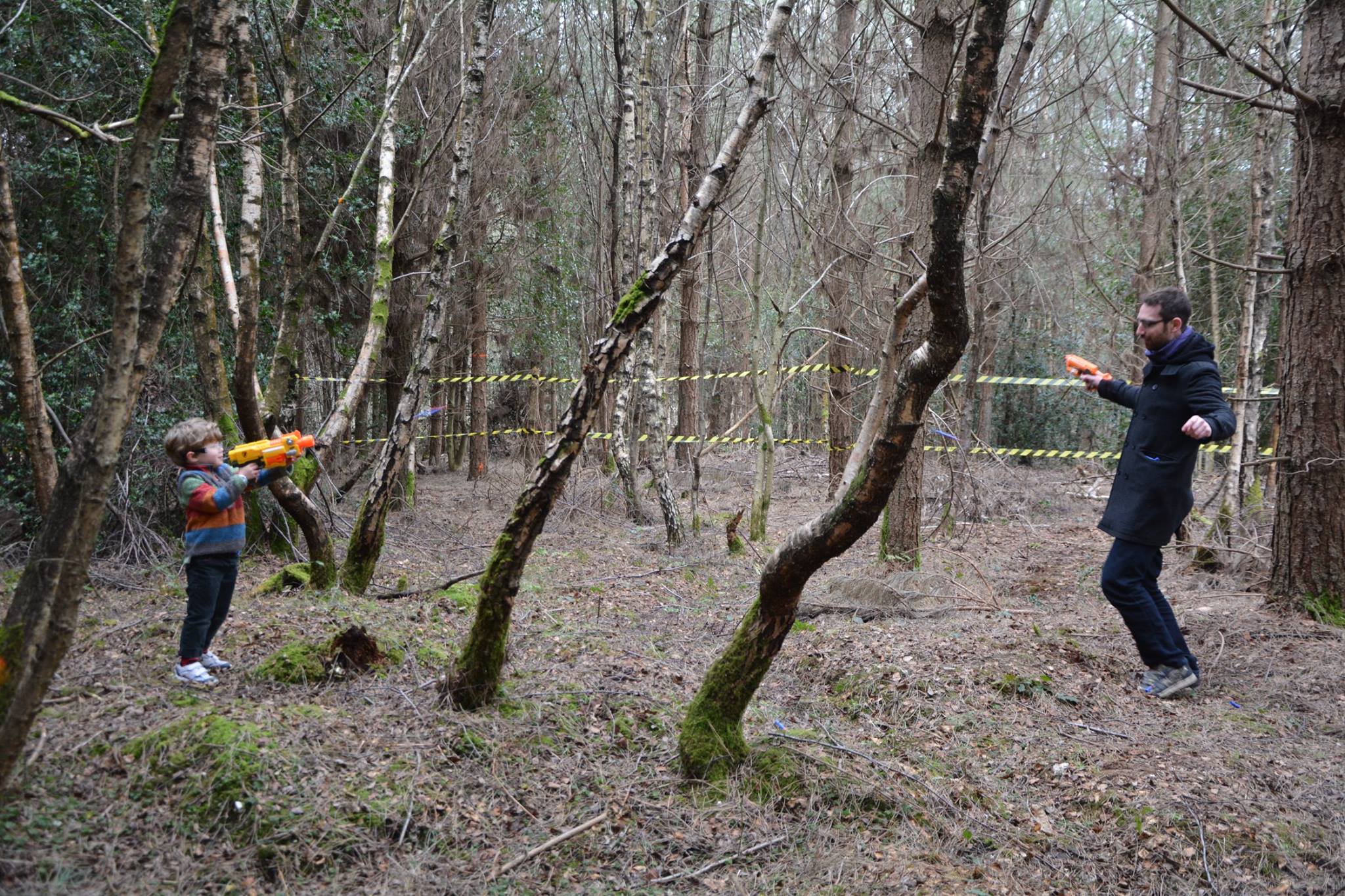